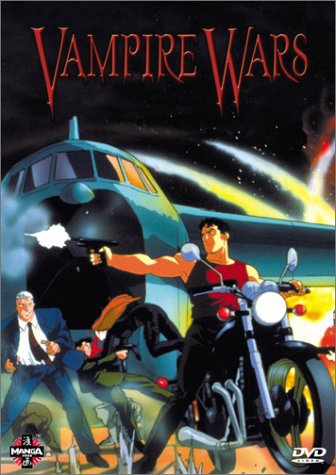 I had this sitting in my queue of movies to watch and when it finally popped out at me to try it, I was hopeful of how it could turn out. A few minutes into the movie (I call it a movie but at a little under an hour, its really more like one episode of a TV show), I felt very confused. The story was moving along at seemingly breakneck pace for the first half of the movie and then finally the plot seemed to click into place. By the time it was over, I really wanted to see more of the story and was very disappointed by the quick and predictable ending.

"Vampire Wars" is an intriguing blend of action, horror, sci-fi, and drama that really leaves you wanting something more to come of the story. It really feels like once you become interested in a scene/plot line/character, things jump ahead. At one point in time, they even jump ahead in the story five days without so much as a wipe, text on the screen, or anything besides the character saying "I waited for 5 days when..."

SUMMARY: Interesting blend of several genres that really deserves more time to tell the tale. It'll leave you disappointed there's nothing more because its over before it really gets going.

6/10. Very cool and promising for something more, but too short to really show what it could be. VAMPIRE WARS (1990) is a short (50-minute) anime thriller that posits a race of vampires living among us who get into a battle with the CIA over the fate of a pop singer named Kiki whose blood turns out to have vampire blood, making her vital to the continued existence of the vampires. It's set largely in Paris, where a French spy agency recruits Kuki Kozaburo, a former terrorist from Japan, to locate and protect Kiki. Little does Kuki know that he's being manipulated in order to get Kiki safely into the hands of a notorious CIA operative known as "Bloody Charlie." When Kuki finally confronts a key opponent and learns the full story behind the conflict, he begins to rethink his loyalties. There are lots of shootouts, fights, and furious chases through the streets, alleyways and hotel corridors of Paris, as well as the occasional vampire bite. The action is often quite bloody, with Kuki dishing out punishment but also taking enough to kill ten men. The plot is rather far-fetched, but things move at such a fast pace, it's not hard to put the questions aside and just enjoy the thrills. As usual with so many OAV (made-for-video) anime thrillers, it ends rather abruptly.

The animation and design are stylish and effective and the frequent action well-staged. The director, Kazuhisa Takenouchi, also worked on "Dragon Ball," "Sailor Moon" and "Magic User's Club."